In 1776, the  war effort focused on retaking Boston and the hinterland around the city including the harbors. General George Washington lacked enough war equipment and real ammunition to carry out his objectives. General Henry Knox, an  ambitious and loyal young officer knew that the British (and before them, the French) had abandoned over 50 heavy cannon at Fort Ticonderoga, built on the Hudson River. He determined that he could load the cannon on sleighs and pull them through the mountains to Washington’s camp in Massachusetts to use against the British embattlements. 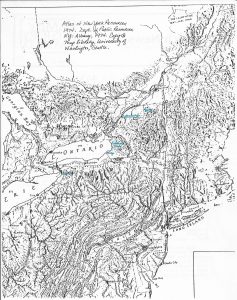 For an exciting and detailed description of this amazing miraculous feat, read David McCullough’s 1776 (New York: Simon & Schuster, 2005). Read all of Chapter Three: “Dorchester Heights.” The drama begins on 17 January with a long letter written by a very depressed Washington laying out his awful position. and continues day-by-day through the winter of 1776 until the 4th of April, when Washington left his camp with an “army that had moved not at all for nearly a year.” Some 50 pages describe the miracle of those cannon!

Your will also enjoy re-reading about the efforts of the citizens residing through eastern New York, and western Massachusetts to supply the shot and other needed supplies for Washington’s Army that miserable winter. My New York Blog, 1 May 2011: Local Knowledge–the kind that Solves Difficult Pedigree Problems–Arsenal of the Revolution:  The First History of the 14th Colony, edited by Edward Fales, Jr., a local artist, with local historians of the 17 Iron Country Towns.  This 100-page gem was published by the Lakeville Journal and The News.  The 17 Iron Towns of the Berkshire-Taconic area were:  Amenia, Ancram, Canaan, Copake, Cornwall, Dover, Egremont, Falls Village, Hillsdale, Kent, Mount Washington, Norfolk, Northeast, Pine Plains, Salisbury, Sharon, and Sheffield–located where Massachusetts, Connecticut, and New York come together.  The manors of Livingston and Van Rensselear were also included.

The above map of New York and its hinterland clearly shows the mountains and valleys east of the Hudson River on whose western bank Fort Ticonderoga was located. And the sharp terrain between there and Dorchester Heights where the cannon were embedded into the rocky hillside. A truly miraculous feat! Your favorite genealogist, Arlene Eakle http://arleneeakle.com

PS Some years ago, accompanied by New York genealogist and good, Ruth Messick, I had the opportunity to drive the raw road cut into the mountains and the forests through which those huge cannon, weighing tons and tons were dragged and pushed by Henry Knox and his men. It was a frightening ride–and gave me a whole different view of the Revolutionary War and its miracles. As well as the surviving records of those men and their work.

This entry was posted in Uncategorized and tagged Map of New York and environs, McCullough's1776, New York in the Revolution. Bookmark the permalink.